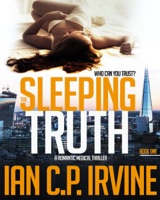 The Sleeping Truth: A Romantic Medical Thriller - Book One

The Sleeping Truth: A Romantic Medical Thriller - Book One Details

Book One of Two Parts: Please note that Book One continues seamlessly into and is concluded in Book Two.

In 2005 London is the best and most exciting city in the world.
But then the terrorist bombs of July 7th blow the city apart, and lives and worlds are shattered... For some, nothing will ever be the same again.

The Story:
In an attempt to escape from his past and start a new life, Andrew Jardine moves to London in July 2005 and moves in with his best friend, Guy.

But when out one night in London, Andrew accidentally sees Guy's new girlfriend, Sal, passionately kissing another man. Knowing that Guy thinks Sal is 'the one', Andrew is now faced with a terrible dilemma: does he tell Guy what he has seen, or does he ignore what he saw?

But before Andrew can make up his mind what to do, the train Sal is commuting to work on is destroyed by the terrorist bombs of the 7th July 2005. Suddenly everything changes. Sal is left in a coma on the edge of life, and in the aftermath of the explosions, Andrew is thrust into the centre of a complex web of relationships where the lives and happiness of those closest to him suddenly become dependent upon him making the right set of choices.

Who is the girl in the coma, really? What is the truth behind her illicit encounter with the stranger in a night club? Should he tell his best friend the truth? Or should he let nature and events take their own course?

While struggling with his conscience in an effort to decide what decisions he should make, Andrew meets a beautiful doctor from Slovakia, and he begins to fall in love.

But can he trust her? What is the truth behind her past, and her feelings for Andrew?

Then, just when events seem to be coming to a happy conclusion, Andrew discovers that everything in his life is based upon a set of lies, and his world falls apart.

What is the real truth behind Andrew's past? And where does his future lie?

Set against the backdrop of London in 2005, this is a tale of our time.

Remember Me? (Book One): A DCI McKenzie Crime Thriller

I Spy, I Saw Her Die (Book One) A Cyber Crime Murder Mystery Conspiracy Thriller

The Orlando File (Book One)

The Sleeping Truth: A Romantic Medical Thriller - Book One

Crown of Thorns - The Race To Clone Jesus Christ : (Book One)

Say You're Sorry - Book One

The Messiah Conspiracy - A Gripping Medical Suspense Thriller (Book One)

The Assassin's Gift (Book One)